Well, our first season as the owners of the A-cat Ghost has come to an end and what a great initiation into sailing it has been! With absolutely no experience in owning a sailing vessel, we relied heavily on the experience of John and Gretchen Coyle to guide us, and they were nothing short of amazing. As the Museum liaison to the sailing program, I went from considering my position as a job, to becoming completely captivated by this beautiful boat, and wonderful sport. As a lifelong commercial fisherman, those who know me were totally astounded that I took to this experience with such passion. But enough about me.

We started our season by going Up Bay for the Wounded Veteran’s sail at the Bay Head Yacht Club on June 11th. What a great day it was; a bit of racing, but mainly being able to give a bit of adventure to our Vets and their families, who have given so much for us all. Longtime sailor, Tom Patterson was at the helm, and has become an integral part of our crew.

Then it was back Down Bay where we put the Ghost into pretty much constant service between sailing the youth and ladies of Little Egg Harbor Yacht Club, the folks at Spray Beach Yacht Club, and at Surf City Yacht Club, where Paul Tarantino headed their youth sailing program and other activities. Although all who sailed with us enjoyed the experience, it was the young sailors, most of whom were sailing on a larger boat for the first time, that really warmed our hearts with their enthusiasm.

On July 21st, we towed back Up Bay to Bay Head Yacht Club for the Callahan, then Shore Acres Yacht Club the next day. What a treat it was for me personally, and I’m sure all of us, to have Bill Fortenbaugh take the helm for the first race. I know we all learned from him. Along with Bill, we were fortunate enough to have his long-time trimmer, Dave Hodor join us, not only for the weekend, but as a member of our crew. As if all of that wasn’t enough, we also were joined by my old friend, and longtime competitive sailor Rich O’Such, who has also signed on for the long term.

Back Down Bay, where we put the Ghost back into service between the island yacht clubs. On virtually any day that the weather allowed sailing, you’d be sure to find the Ghost somewhere on the lower bay.

August 13th brought the event that we had all been looking forward to, the Down Bay Regatta at Little Egg Harbor Yacht Club. We were particularly excited because the Ghost was to be crewed by the young sailing instructors of Little Egg Harbor Yacht Club. Unfortunately, the weather did not allow for any practice, and the wind was still pretty stiff on Saturday, so we added Dave Hodor, and Rich O’Such to the crew as trimmers. The results of the first race were not great, but not unexpected. We had more instructors on the chase boat, and the plan was to swap them out between races to give them all a chance, but skipper Sam Flagler decided to add them to the existing crew for the added weight, since many of the instructors were rather petite ladies. He also made the call to not put in a reef on the sail. This proved to be a good decision, as the Ghost crossed the starting line first. In spite of the crew’s best efforts, they could not hold onto the lead, but did finish in third place; rather remarkable for a group that had never sailed the boat before, and racing against such an experienced group. The course was abandoned due to the wind before the start of the third race. Who knows what the results of that race would have been considering the progress made by our crew in just two races. On Sunday, Sam was replaced at the helm by Trevor Koerwer, and Rich was replaced as a trimmer by myself. The first race started to very little wind, but it gradually increased throughout the day. By the second race we had all of the wind we could use. Skipper Trevor did a very credible job, and we ended the day with a fifth and a sixth place finish. Just as a side note, none of us trimming offered any comments or advice to the rest of the crew. It was quite a treat seeing them working together and discussing their strategy. The crew was very excited, and justifiably proud of their accomplishments. We can’t wait to see how they fare next year!

After the Down Bay, it was back to pretty steady sailing for the Ghost, introducing many local sailors to the grace and beauty of A-cats.

On the weekend of September 16th, the boat was in the service of Jack Barclay, on the occasion of his daughter Gwyneth’s wedding at Little Egg Harbor Yacht Club. We spent both days sailing friends, family, and the wedding party, after which the boat was used as a backdrop for the wedding and reception. As a result of this, Jack has offered his services to our team as a rigger, who assures us he can get more speed out of the boat, but also has volunteered his trawler yacht to tow Ghost up and down the bay. Having a comfortable means of towing will no doubt encourage us to spend more time Up Bay next year. Jack also assures us that this wedding was a one time deal, so Ghost will participate in the A-cat Worlds next year.

As you can tell by this newsletter, we’ve had a very active first year, and have picked up some incredibly talented people for our team. To Tom Patterson, Dave Hodor, Rich O’Such, Paul Tarantino, Jim Doherty and Jack Barclay, as well as the instructors at Little Egg Harbor Yacht Club, you have the gratitude of John Coyle and myself for all that you have done to help us join the family of Barnegat Bay A-cats. Hopefully, we’ll get Up Bay more next season and will be able to race a bit more competitively.

As I write this newsletter, Ghost is comfortably stored in John Coyle’s barn, where John, Bill Appleget, and myself will be spending the winter putting her back into Bristol Fashion. I’d like to thank Bill deRouville for his help, and for his understanding that we are working with somewhat limited funds and being willing to do our spars while we do all of the painting and such ourselves.

I’d like to offer our sincerest thanks to all of you that have donated to our A-cat fund and made it possible for us to become a part of this wonderful tradition. Perhaps John and Gretchen will host another gathering next season like they did this year. You have my word, that any donations to the A-cat fund will be used solely for that purpose and will not be used for any other museum expenses. From the outset, we have stated that we have no intention of deriving any financial gain from this endeavor, and we intend to stand by our word.

Finally, I’d just like to thank everyone for the warm welcome that we have received from the A-cat community and all of the yacht clubs that have hosted us.

(Some images of GHOST are posted in the Gallery section of the web site under Special Events.  If you have any photos of GHOST or RAVEN which you would like included in our gallery, please send them to Dave@NJMaritimeMuseum.  Include the name of the photographer for photo credit) 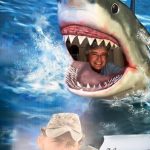 Winning Numbers from the 2016 Fundraiser 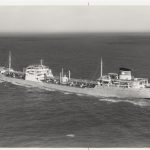 Rescuing the Crew of Stolt Dagali