We were delighted to welcome about 50 of Capt. Hank Garvin’s family and friends to a memorial ceremony and the unveiling of the museum’s display of Hank’s artifact collection.  On Saturday, April 23, museum executive director Jim Vogel opened the ceremony expressing appreciation to Hank and his family for donating the collection to the museum.  Jim also described the meticulous steps taken to photograph, inventory and appraise the collection.  Work is still in progress to identify the ship from which each artifact came.

Lee Garvin thanked everyone for coming to the unveiling. Lee spoke of his father’s legacy as a diver and a captain and how it was earned.  Diver/author Gary Gentile then spoke about his many experiences diving with Hank.  He highlighted that his 200th dive on the Andrea Doria was done on Hank’s boat Garloo.  Finally, Barry Lipsky, president of the Long Island Divers Association, spoke of the impact that Hank had on the Long Island diving community.  Hank was always very generous with his time and resources.  He provided many dive trip prizes to LIDA and other organizations who sought his help.

From my own memories, I was on the Wahoo for several dive trips with Captains Steve, Janet and Hank on the bridge.  Hank would frequently be the first diver down to set the hook.  When Hank came up, he always had something special in his bag.  Maybe a cage lamp or a bottle or a plate.  He never came up empty handed. Hank was an advocate of “progressive penetration”, i.e., going a limited distance into a wreck, memorizing everything in that space, then going further and doing the same on each subsequent dive.  Hank considered this approach to be safer than rapid penetration using a wreck reel line to be your guide back out.   It also provided a better appreciation inner spaces of the wreck and what was there. “It’s like walking through your home in the dark. You can visualize every wall and all the furniture in your mind. ”

Hank was part of the second generation of North Atlantic wreck divers.  Hank was among those divers who took the sport from a dangerous art to a far safer science using rules, training and technology. We will miss him greatly.  But we now also have the opportunity to celebrate his achievements through the display of his “treasures” at the NJ Maritime Museum.  Our sincere thanks to Hank for his generosity and to Lee and Ilise Garvin for their presence and participation at the dedication of this display. Hopefully, the visual and written legacies left by Hank, Gary and others will spawn the next generation of wreck divers to our local waters. 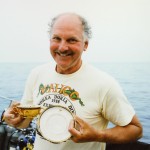 A Tribute to Capt. Hank Garvin