November? Every newspaper and every local TV news station had a reporter “on the scene” accepting any and all guesses over which ship it might be. Then all went silent. Without new information, the mystery ship disappeared from almost everyone’s radar. We at the New Jersey Maritime Museum still care and we continue to follow the activities of the NJ Dept of Environmental Protection in their search for an identity.

The ship was uncovered while building a 3.5 mile retaining wall on the Mantoloking Beach as part of the recovery efforts from Storm Sandy. Construction was halted at that spot but continued elsewhere. An archeologist and historian were hired by the DEP to investigate the wreck. Unfortunately, several important planks were illicitly removed from the site. What still existed of the excavated wreckage was moved to an undisclosed NJ State garage, an adjusted path was designed for the retaining wall and the construction work was completed. The rest of the ship still lies 25 feet under the dune.

The archaeologist is now working with the deck material that he has. He (and we) are searching for every bit of information from 19th century news clippings, US Lifesaving Service reports and marine intelligence reports to determine the ultimate fate of ships that went ashore in the immediate area of our mystery ship. Our museum records can identify about 30 strandings that occurred between 1837 to 1880 within a 2.5 mile stretch of beach. Research has found that several of those stranded ships were re-floated and towed away.

Further, the archaeologist believes the ship was in excess of 100 feet in length and trans-Atlantic passage capable. That eliminates many coastwise vessels including small schooners, sloops, fishing boats and barges.

We continue to keep in touch with the archaeologist and our friends in the DEP Historic Preservation office.

My hope (my dream?) is that funding will be found to dig up the rest of the buried remains which will certainly provide a clue to its identity. I personally have narrowed down the possibilities to five or six ships and have picked out two most-likely favorites. What are they? 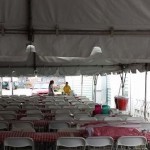 Save the Date for our 2015 Annual Fundraiser! 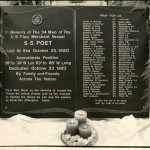 The Disappearance of the S.S. Poet