The Disappearance of the S.S. Poet

Question: How can you lose a 500 foot steam freighter? Answer: Get lost while passing through the Bermuda Triangle. Not exciting enough? How about it was taken hostage by South Jersey mobsters and sailed to Iran to buy heroin. Still needs more spice? OK, it was hijacked by Ronald Regan’s political operatives, loaded with weapons, taken to Iran and exchanged for the future release of the American Embassy hostages.

I am not a big fan of the Bermuda Triangle folklore. Nor do I buy into the various conspiracy theories involving the mafia or criminal politics. Those stories play well on the Discovery Channel but whither when exposed to reality. But there is a fascinating story to be told about the S S Poet that deserves a closer look.

First, the facts. The Poet was built in 1944 as a C-4 class military troop carrier in Richmond, CA. It was 522 feet long, 11,421 gross tons and named General Omar Bundy, AP-152. It served the military until its sale in 1965. It was refitted to be a bulk cargo freighter and had other names including Portmar and Port. It was finally bought by Hawaiian Eugenie Corp. in 1979, renamed Poet and put to work hauling grain.

Poet departed Philadelphia on October 24, 1980 with 13,500 tons of yellow corn bound for Port Said, Egypt. Once clear of Delaware Bay and the pilot relieved, Capt. Leroy Warren and his crew of 33 set a course for Gibraltar. At 8:30 pm, Poet radioed its position off Cape Henlopen, DE, its course, speed and that all was in order.

Poet was never seen or heard again. Not a trace. No life boats. No debris. Nothing.

So what happened? The Coast Guard casualty report suggests it was lost in a significant storm which swept through Poet’s path with high winds and 30 foot waves. However, other ships in the area reported the storm as severe but not a killer. Some think that water flooded the forward hold, caused the corn to expand, split the ship wide open and quickly sent her down. Perhaps. But the holds were certified water tight. And the US Dept of Agriculture had closed and sealed all grain hatches before departure.

A more fun theory is that South Jersey mobsters from the Gambino family hijacked the ship, sailed to Iran and traded the corn and ship for heroin. Maybe. But the voyage around the southern tip of Africa, through the Arabian Sea and Gulf of Oman is a long way to go and not be seen. It is also a long trip to buy heroin from a country not known as a big heroin producer.

But the best theory is that political operatives for the Ronald Regan presidential campaign hijacked the ship, loaded it with weapons and sailed to Iran. In exchange for the weapons, Iran agreed it would not release the American Embassy hostages until after Ronald Regan became president. It is true that the American hostages were released during Regan’s inauguration. But Poet left Philadelphia 11 days before Regan won the election. That is a long reach even when observed through the insanity of modern US politics.

Regardless of how the Poet met its demise, the one simple sad truth is that 34 sailors perished when the ship disappeared. In Philadelphia, a bronze memorial plaque honors the crew of Poet. And family and friends of the 34 men still mourn their loss. Amusing conspiracies aside, it ranks as a major American maritime tragedy. 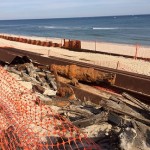