While studying New Jersey’s involvement in the Revolutionary War, I keep trying to imagine the real life of a New Jersey resident during that volatile time. New Jersey was not a politically united territory. Sandwiched between British strongholds in Philadelphia and New York, various historians estimate that anywhere from 30 % to 50 % of New Jersey residents remained loyal to the British crown. And some residents might have been branded PINO’s (Patriots in name only) when the French joined the war on the side of the Americans. Many “patriots” switched back to being loyal to the Protestant British king rather than fight along side soldiers provided by the Catholic French king. Bigotry before country!  Surprise attacks by either army were virtually impossible since spies lurked everywhere and readily reported opposition troop movements. The war also became a battle of neighbor vs. neighbor. Quite often, a man joined the local militia to fight for the patriotic cause only to return home to find his house burned and his livestock stolen by his neighboring loyalists.

Amid all this turmoil, some men emerged as true super heroes for the American’s ultimate combat success. One Sunday morning, a woman visited the Maritime Museum and asked if we had any information about Adam Hyler.  Except for references in some history books, we had little. She then introduced herself as a descendant of Adam Hyler and offered to send me articles about him from her collection. With that as a spark, the Raritan Bay privateers came to life at the museum.

Adam Hyler was one of two pesky privateers of the Revolutionary War. Preceding him by a year was William Marriner. Sometimes I think that Seal Team Six studied the daring tactics of these two business men turned  patriot privateers. Both knew the docks and neighborhoods of New York and were known to steal ships and capture notable Loyalists right from under the sight of British officials and military. Both men lived in New Brunswick and conducted most of their raids in Raritan Bay and around the British stronghold at Sandy Hook. They used fast lightly armed sloops and whaleboats (as pictured) to capture British merchant ships. While being very successful at their trade, these men were not blood thirsty pirates. It was reported that Adam Hyler captured 5 British ships in one night.  He took the cargo from four and burned them.  But he left the fifth undisturbed since there were women and four small children on board.  Marriner was finally captured by the British and forced to sit out the rest of the war.  Hyler had a mysterious death.  Some accounts say he was poisoned by a Loyalist tavern owner. Why would a notorious outlaw like Hyler patronize a Tory tavern?  That’s like me going into a biker bar. Doesn’t fit. Most likely, he died of a wound received in one of his final conquests.

Whatever the cause, these courageous privateers terrorized the British all along the New Jersey coast. In some part, they made up for the lack of an American navy and kept the Royal Navy busy. These are fascinating pages in New Jersey’s maritime history that have gotten very little attention in the history books.  Tom Farner published a book in 1996 – “New Jersey in History, Fighting to be Heard” – which is a collection of many of his early “200 Plus” articles. This has become my late night reader.  I hope Tom will publish another collection since his articles about the above exploits came years after that book went into print. I hope to give Revolutionary War maritime history more visibility at the museum in a way that will appeal to history students of every age. Suggestions and help will be greatly appreciated. 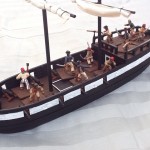 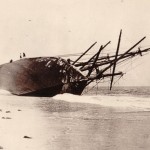 The Story of Fortuna