WHEREAS. The Senate and General Assembly of the State of New Jersey are pleased to salute the Honorable Deborah Whitcraft, a highly esteemed resident of the Garden State, in grateful recognition of her outstanding service; and,

WHEREAS, What started as a childhood dream of opening a museum free to the public that has since become a dazzling reality, Deborah Whitcraft has been celebrated by her community as the founder and president of the New Jersey Maritime Museum, through which she has devoted herself to preserving the history of the endeavors that have taken place on our shores, promoting the proud tradition of North Atlantic wreck diving, and keeping the memories of shipwrecks like that of the SS Andrea Doria and the MS Stockholm, the Sixty-Fifth Anniversary, of which falls on July 25, 2021; and,

WHEREAS, The former owner of the Triton Divers dive shop and the Black Whale fleet of passenger boats on Long Beach Island, Deborah Whitcraft has earned a sterling reputation as a diver herself with an extraordinary collection of artifacts, documents and photographs of the New Jersey maritime history more than forty years in the making that is now showcased at the Museum along with those from other seafaring enthusiasts and scholars; and,

WHEREAS, a wedding officiant and the co-author of Inferno at Sea and works on the history of Tuckers Island and Beach Haven, has been further appreciated for her two term tenure as the Mayor of Beach Haven, her selfless efforts as an EMT for the Beach Haven First Aid Squad and her generosity of spirit in opening the Museum as a respite for first responders during weather emergencies and as a meeting place for various clubs and social groups; and,

WHEREAS, The strength and prosperity of the State of New Jersey and the vitality of our American Society greatly depend on such concerned and industrious individuals, exemplified by Deborah Whitcraft, who works tirelessly not only to safeguard precious relics of the past, but also to ensure the welfare of her fellow citizens; and,

WHEREAS, It is altogether proper and fitting for this legislature to pause in its deliberations to acknowledge Deborah Whitcraft as a woman of strong character and exceptional determination; now, therefore,

That this Legislature hereby lauds Deborah Whitcraft, pays tribute to her meritorious record of excellence within all the spheres of her life, and extends sincere best wishes for her continued success and happiness; and,

Signed by Stephen M. Sweeney, President of the Senate

Signed by Craig J. Coughlin, Speaker of the General Assembly 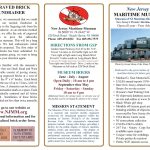