Meredith Victory – the Ship of Miracles 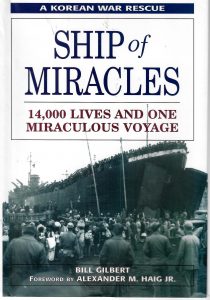 Early in September, we had a visit to the museum by Elmer Smith and his family. As he was leaving, he expressed appreciation for the hospitality and promised to be in touch with some information about his brother Merl who served in the Merchant Marine during the Korean war

To put this story in context, a brief history lesson is in order. When Japan surrendered ending WW II, Korea was split in two with the Soviet Union controlling the northern half and the US occupying the south. And as still exists today, the north became a communist country; the south became a democracy. In June, 1950 with support from the Soviet Union and the new communist government in China, North Korea invaded the south and almost succeeded in taking control of the entire country. The US Army – with United Nations support – reinforced South Korea but could not stop the invasion. By August, 1950, only 10 % of the country remained out of communist control. In September, a brilliant counter invasion by US forces at Inchon changed the entire momentum. The North Korean army collapsed in full retreat. UN forces and the South Korean army pushed north with the intent to take over the entire peninsula. But China intervened and sent their army into Korea which again changed the balance of power. Chinese troops drove the UN forces back south and pinned many of the US troops (105,000) in a Northeast Korean port of Hungnam. The US Navy was called in to evacuate these troops as the Chinese army closed in.

Along with the US Army, roughly 100,000 North Korean civilians decided they could no longer live under communist suppression. They also filled the roads headed for Hungnam hoping to be saved from the Chinese and North Koreans.

Merl Smith (brother of Elmer) was an engineer on the Meredith Victory which was a WW II cargo ship. Victory ships were the next generation of the famous Liberty ships, being bigger, better powered and faster then the Liberty ship. Meredith Victory was making regular trips from the west coast to Japan with military supplies. With the start of hostilities in Korea, she started moving cargo to US held ports in South Korea. In December, she was headed to South Korea with a load of jet fuel in 55 gallon barrels. While unloading, the ship was ordered to go to Hungnam to participate in the evacuation of US troops. When Meredith Victory arrived, the troops had been loaded and were gone. However, the throngs of North Korean civilians remained on shore. The civilians were being loaded on any boats and ships that remained in the port. Some of the boats were questionable in their ability to transport people to a safe port. The captain of Meredith Victory – Leonard LaRue – was asked if he would make his ship available for civilian evacuation. The captain (and crew) never hesitated in their acceptance to this assignment. Over the next 24 hours, 14,000 civilians were loaded into this cargo ship’s holds which had facilities to accommodate 43 people. They had no food or water beyond what was needed for the crew. And there were no sanitation facilities for more than the crew. The civilians were packed in like sardines with barely enough room to move. Did I mention that this was in mid-December of the coldest winter in recent Korean history? The ship’s holds were unheated.

When Meredith Victory entered Hungnam port, she was ordered to follow a minesweeper since the waters were heavily mined by North Korea. When Meredith Victory left Hungnam, the minesweepers were gone. She sailed out alone and totally unprotected. Likewise, she was on her own for the next three days with no military escorts. When she arrived at her destination of Puson, they were turned away since that port was already overwhelmed with refugees from prior evacuation ships. She pressed on to an island further south and finally landed her cargo of 14,000 refugees on South Korean soil.

Meredith Victory has been called the “Ship of Miracles”. There are several reasons for this name. First, the ship actually carried a cargo of 14,000 people in a very modest ship with no facilities for such a crowd. Second, of the 14,000 refugees packed on board, NO ONE DIED in transit. Considering the lack of food, water, medical supplies and cold temperatures, no fatalities is truly a miracle. Third, during the passage five babies were born and all survived. Ditto on my prior remark about lack of anything. And finally, through all of this, the ship somehow navigated safely alone through hostile waters and mine fields to a safe port.

Elmer Smith sent us several articles describing the service and crew of Meredith Victory. This included an article on the celebration of the passage of Meredith Victory 50 years later in 2000. Merl and other crew members were in attendance in Seoul, Korea to celebrate the evacuations and recognize some Korean refugees who had become important government officials since. This is a great story of American humanitarianism to a people who could otherwise have been ignored. In spite of our scars from WW II, we were still a country of compassion for refugees in need of our help. Thank you to Elmer Smith for bringing this act of humanity to our attention. I hope we can keep Merl Smith’s belief in American ideals alive at our museum and our recognition of the contributions of the US Merchant Marine.

The entire story of the Meredith Victory rescue can be found in the book “Ship of Miracles” by author Bill Gilbert. This is a good and quick read that will enhance your knowledge of Korean war history frequently referred to as the forgotten war. It is available from Amazon. The story is also the subject of a film produced by R J McHatton and is available on DVD. I have both and will share with you on request. The articles sent to the museum by Elmer Smith have been included in a Merchant Marine special subjects notebook available for review at the museum.

Our goal at the NJ Maritime Museum is to share our knowledge and resources with our visitors and patrons. We are most grateful when our visitors enhance our maritime history knowledge with new information we didn’t have previously. Thanks again, Mr. Smith. We look forward to your next visit. 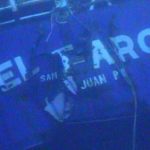 Into the Raging Sea – The Story of SS El Faro 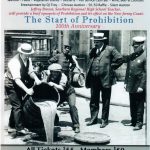