As we slide into another year, I’m happy to report that we are finally approaching our version of normal. Although I doubt if COVID will ever go away, we’ve finally gotten past the point of everyone being afraid to be in the company of others. Thankfully, we’ve also been able to do away with our masks. As the number of visitors is better than ever, we’ve been very pleased to welcome back old friends, and make new ones. 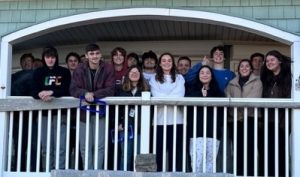 In December, we were visited by a wonderful group of Wall Township students and their teacher, Kelly White;  we can’t speak highly enough of this teacher, the chaperones, and the students who showed a keen interest in a subject that is barely – it at all – covered in our schools’ curriculum. We hope to see more students from other schools in the near future.

Good news;  after three years without a fundraiser, we will now be bringing it back in a new form on May 6th. Thanks to the generosity of of Bill and Linda Burris, Bob and Ginna Nugent, and Eric and Melanie Magaziner,  we have been offered the use of Bird and Betty’s for our 2023 fundraiser. For us, that means no more renting tents, tables and chairs, no worries about setting up the bar, and no struggling to feed everyone. Deb’s brother Okie, along with Buckalew’s, The Sea Shell, and others, will be assisting the staff at Bird and Betty’s with the food, so there’s no doubt in my mind that it will be better than ever. The raffle, Chinese Auction, and Silent Auction will be the same as always. The only small change, other than the date, will be the time. This fundraiser will start at 4pm and end by 9pm. Tickets are now available and may be purchased online or at the museum;  save the date!

More good news! The monthly presentations at Buckalew’s are back. We started in October with Gene Peterson speaking to us about Max’s wreck. On December 2nd, Tom Packer and Steve Gatto presented a fascinating program about 65 years of diving the Andrea Doria by the Boston Sea Rovers. Our next program will be on January 20th, with Jen Selitti and Joe Mazraani speaking about the USN Destroyer Murphy. As always, these programs are wildly popular and are generally filled by members. If you are not a member, but are interested in attending one of these presentations, your chances are not very good. Get a membership!

On to another subject which I briefly touched on in my last newsletter, our endowment fund. Due to the extreme generosity of two members who wish to remain anonymous, we have established an endowment fund in an effort to remain financially sound. This fund will produce some income that, if needed and approved by the Board of Trustees, can be used, but as long as things go as planned will not be touched. The principal is only available in case of an unexpected emergency. We have a very nice start on this project, but in order for it to become what we envision in our long term goal, we will need further contributors. If any of you are in a position to help in this endeavor, please get in contact with Deb or myself and we’ll be happy to go into the particulars of this project.

I am quite pleased to be able to report that the Marine Science Camp that we host for New Logic, under the command of Sherri Paris, has turned into a smashing success. I’ve probably reported on this before, but it bears repeating. Right after Hurricane Sandy we met Sherri, who is the founder of New Logic Marine Science Camp. She is from Lavalette, and had lost her home and pretty much everything in the storm. She approached us to see if we would host her camp for two weeks the following summer, hoping to find a new area from which to draw. With help from a couple of other local businesses, we made sure she had all the equipment she needed, and the camp was successful. Since then, the camp has expanded gradually to the nine weeks that we hosted last year. On top of that, Sherri told me that she had a waiting list of over 100 campers for just Beach Haven. She now has camps in various locations along the east coast. We are so very proud of, and happy for Sherri;  she’s just a hard working, wonderful woman who has risen from the ashes, just like the Phoenix. As I write this, Deb has just informed me that the camp will be expanded to 11 weeks this summer.  We are truly honored to host this camp!

I’d like to apologize to those of you waiting for your engraved pavers, even though it’s not our fault. The order went in five months ago, but according to the people that make them, the heat was so high that they could not go into production. They are now working, but of course there were a couple of orders ahead of us. Deb has been on them like a dog gnawing on a bone and has been assured that they will be done soon. I’ve consulted with the installation crew and I can say with some certainty that I’d have preferred installing them in warmer weather. I’ll get them in as soon as possible.  We have been assured that all new orders will be processed expeditiously. 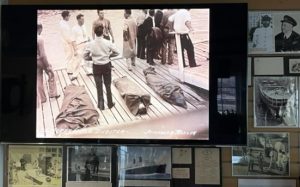 We’re so fortunate to have a very solid corps of volunteers, and I’d like to take a moment to recognize them. Gretchen Coyle, Susanne Gilbert, Dave Swope, George Hartnett, and Ray Mann do a yeoman’s job at the museum and at our presentations. At our presentations we also have Melinda Morrow, Ryan St. Andrew, Heather Mann, and Rick Ensminger to help out. Trustee Leslie Houston recently donated a 55” tv that we’ve installed in the Morro Castle room to memorialize the victims of this1934 disaster.

The latest addition to our volunteer staff is long time diver Nick Yannos. Nick’s been coming up from Somers Point once a week for a while now and has been instrumental in helping us clear out a bunch of old junk that just doesn’t apply to our mission. We’ve been working him pretty hard, but he just keeps on going with a great attitude.

Most of you are aware that our in-house writer, Gretchen Coyle, produces a weekly maritime column that appears in several Gannet publications, including the Asbury Park Press, Beach Haven Times and Times Beacon.  She has a growing fan base that looks forward to her articles and readers often call or visit to share their own knowledge of topics she has covered.  A real big thank you to all of the aforementioned, we could not do it without you!

In mentioning Nick, I’d like to thank him for working with me on our Fearless Leader’s latest project. Those of you who have tried to access our binders on the first floor know just how difficult it was to get them out of the cases. Well, that’s no longer a problem! Deb found the solution at IKEA;  however we had to drive to Conshohocken in her brother Okie’s Butcher Shop van to pick them up. Deb, Nick, and I, with an assist by another renowned diver, Tom Fagan, then spent a day assembling them and transferring binders. Not only do they look better, but they are much sturdier, and are more user-friendly for our researchers. I think you’ll like them.

The donations keep on coming in, and we do our best to find room for them. Our friend George Bates stops by on a fairly regular basis with another truckload of artifacts, the latest being a load of whaling related items. We’re going to have to build an addition just to house his collection. Chuck Zimarro, longtime friend and another highly respected member of the diving community came by with a large amount of Texas Tower related items, photos and documentation which we will be integrating into our display. We’ve also received a number of smaller donations that we’ll be using as we do our annual rotation and expansion of displays.  As we always do, we’ll be showing a revised, updated appearance for next season.

In closing I’d like to wish you all a very happy and healthy new year. We’re open Friday, Saturday and Sunday, from 10am to 4pm during the off-season months;  please stop by when you’re in the area. We look forward to seeing you. 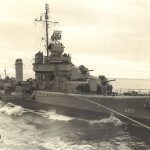 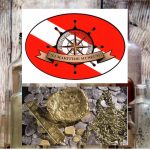