Barnegat Light and the Sea King July 13 is Discover Barnegat Light Day. This event is a great opportunity to visit the north end of LBI and to celebrate its rich maritime history. Whether you participate in the special day or any other, a day trip to Barnegat Light is time well spent.

The tour should start at the Lighthouse, of course. Climb to the top if you can. The view is breathtaking. Then take a walk down the long South Jetty. Watch the boats coming and going. People will be fishing from the rocks. Stop along the way, look out at Barnegat Inlet and visualize all the ships that have sailed into this waterway seeking shelter from countless Atlantic storms.

The next stop is across the street from the lighthouse to visit the commercial fisherman’s memorial. Barnegat Light has been a center for commercial fishing for many years and has lost several to this deadliest of jobs. The memorial pays tribute to those who have died and those who continue to make their living as fishermen.

Swing past the Coast Guard station and down to Viking Village. Lined up in front are the party and charter boats for recreational fishing. The fleet takes fishermen out all summer in search of fluke, sea bass, bluefish and tautog. But that is for another day. On the south side of the marina are all the commercial fishing boats making ready for long trips to sea in search of fish, scallops or lobsters. This commercial fleet compares well to the fabled fleets harbored in Gloucester, Mass and Cape May. Finally, stop to visit the shops at Viking Village. All the fashions for a summer, beachy wardrobe are available here.

After lunch at one of the restaurants or diners at the north end, it’s time for a walk in the dunes. Park at the ocean end of 11th Street and take the path into the moonscape dunes of Barnegat Light. This is like no other walk to the beach you have ever done. Some dunes rise up 30 feet above the wooden pathways. After winding through the sand paths for 400 yards, a metal spike appears rising up 30 feet above the sand. That spike is actually the mast of the fishing boat Sea King.

The history of Sea King is quite boring until February 12, 1963. On that day, the 95 foot trawler was towing the decommissioned minesweeper Prescott to Atlantic City for refitting. In a thick fog, both ships were stranded on the Barnegat Shoals. Prescott was later refloated and saved. But poor Sea King could not be salvaged and was doomed to be buried in the sands .

What amazes most visitors (and me) is that the Sea King and her rusting mast are easily 200 yards from the shore. How could this be? The answer is that south jetty you walked earlier in your tour. The jetty was extended to its current length in 1992. The natural ebb and flow of the ocean causes sand to build up on the south side of such an obstacle. Over the past 23 years, nature has been depositing sand past the south jetty creating over 200 yards of sand dunes and beaches between Sea King and the surf. Thus was created another fascinating chapter of LBI maritime history and one of the most discussed shipwrecks at the NJ Maritime Museum. It is a fun shipwreck story. Stop in some day and view the entire set of Sea King photos. 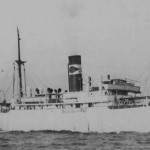 Disappearance of the S. S. Miraflores 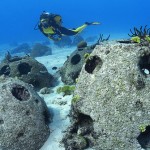