As another year comes to a close, it’s time for us to draw a deep breath, roll up our sleeves, and get down to work. There’s always so much to do that has accumulated over the summer. We’ve been fortunate enough to have received some wonderful donations of artifacts that have to be put on display, including a huge collection from the late Capt. Hank Garvin. Rest assured that we’ll be getting to work on that ASAP.

Now that the Robert J. Walker exhibit in Atlantic City is finished, we are proud to host the sole permanent display of the history of this ill-fated vessel and have received the artifacts from Steve Nagiewicz. These artifacts will be added to the display previously created by Dr. James Delgado and his crew from NOAA and the staff of Capital Exhibits Services.

We mentioned in our last newsletter that we had received the 400-lb. tool chest, dated 1881, of James E. Robinson, ship’s joiner, from Vickie Stewart of Nebraska. We’ve been searching high and low for a qualified appraiser for this collection, but didn’t look right under our own noses. It turns out that Father Frank Crumbaugh of Holy Innocents Episcopal Church, right here in Beach Haven, is just the person we’ve been seeking. Father Frank has taken a look at the tool chest and is very excited by it. He’ll be spending the winter going over this collection piece by piece, but has already indicated that the value of these tools will be well beyond what any of us had imagined.

Speaking of wonderful donations, thanks to the efforts of John and Gretchen Coyle, the museum has been honored with the donation of two “A” Cats, 28 foot long sailboats that were originally used for fishing and sailing parties but that are now primarily used for racing. The Ghost is the gift of William Fortenbaugh of Bay Head, and the Raven has been donated by Dave Alldain of Brick, Cory Wingerter of Millstone Twp., Mike Tufariello of Brick, and Peter Stagaard of Mantoloking. Since there is no way that the boats could be displayed either inside or outside at the museum, they will be used by local yacht clubs, sailing organizations and groups on a lend/lease basis. I’m told there is a possibility of a third “A” Cat being donated after the new year. Needless to say, we are extremely excited by these new additions to the museum that certainly open up a new dimension of New Jersey’s maritime history for us. We look forward to seeing them racing this coming summer, bearing our logo on their sails. The work that has been done to make this possible, and the continuing work that will be necessary in maintaining these beautiful sailing boats is truly staggering and we cannot thank the Coyles adequately for taking on this project for us! We are truly grateful to both of them, and to the donors of these magnificent vessels.

As we look back on the past year, we certainly have to tell you about our 7th annual fundraiser, themed A Celebration of Beach Haven’s 125th Anniversary, that was held on September 12th. Each year the event seems to get bigger and better. This year there were over 450 attendees. We’re quickly getting to our cut off number of 500, so don’t wait too long next year to get your tickets. Once again we had some rain on the evening of our gala, but taking a lesson from our previous year, we had a much better tent arrangement and the weather did not really have much of an adverse effect on us. We’ve already arranged for an even larger tent for next year (at the expense of Deb’s beloved holly tree that once adorned our parking lot), and will be fully prepared for Mother Nature. Our 2016 fundraiser will be held on Saturday, September 10th, and its theme will be the 100 Year Anniversary of the 1916 Shark Attacks. We’ll have plenty of opportunities to get creative with that theme, and I know that Deb is already looking into a mechanical shark. Before we leave the topic of our fundraiser, I like to once again thank all of the businesses that, year after year, donate prizes for our auctions, those businesses that provide and help us with food, and of course our fabulous corps of trustees and volunteers who work so hard to make our fundraiser the great success that it has become!

We recently welcomed back the film crew from the Travel Channel program Mysteries at the Museum. As you may recall, they were here a few years back to film an episode on the Morro Castle, which continues to air on a regular basis. This time around, they are putting together a program on the 1916 New Jersey Shark Attacks. We’d like to thank Dean Fessler, the Director of Education for the Shark Research Institute, who most graciously agreed to represent our museum and be interviewed for the program. We’ve been told that the episode should air sometime in the late spring or early summer of 2016 and we can’t wait to view it!

After some unanticipated delays, the documentary Rising Tides is now complete and will probably be launched at screenings and film festivals starting in January. This documentary is about the effects that global warming is having upon our sea level and how that will affect those of us living near the worlds oceans. Some of the filming was done here at the museum, and the interviews of our President, Deb Whitcraft, and docent Gretchen Coyle are included in this film. The trailer for this documentary can be seen at www.risingtidesthemovie.com

Added to the great media exposure we’ve been getting from these film productions, our own Deb Whitcraft and Gretchen Coyle have been on tour speaking not only about their latest book, Tuckers Island, but still entertaining audiences on their favorite subject, the Morro Castle and their highly successful book, Inferno at Sea. The proceeds of the sales of these books are earmarked to help offset the operational expenses of the museum. Aside from traveling the state of New Jersey, they have also scheduled talks in Florida this coming winter. Good job ladies; keep it up and we’ll soon establish national prominence!

Our project to digitize our shipwreck files is still moving ahead with Dave Swope adding new information as it becomes available. Phase two, scanning over 50,000 documents, is almost complete and will be added to our online database site sometime this winter. Rita Kuhn is now working diligently on phase three, the scanning of all available photographs. When she is finished, we’ll have over five years involved in this project, but of course it will never be complete, so Dave has no worries about how he’ll spend his retirement years. A benefit of this project has been a major increase in the number of students and researchers using the museum as a primary resource for information they need in their maritime studies.

I think you’ll realize from just the content of this newsletter that the museum has been a busy place and in the relatively short time (nine years) that it has been in existence has achieved an impressive level of prominence in its field. I see no reason to doubt that we shall continue to grow and prosper, and I live in fear of the day that Deb decides we need to expand our facilities, either through an addition or an annex. Don’t be surprised if that comes to pass; I won’t!

In closing, I’d like to offer our best wishes to all of you for peace and happiness in the coming season and throughout the years ahead.

Dedicated to the preservation of New Jersey maritime history for future generations! 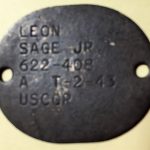